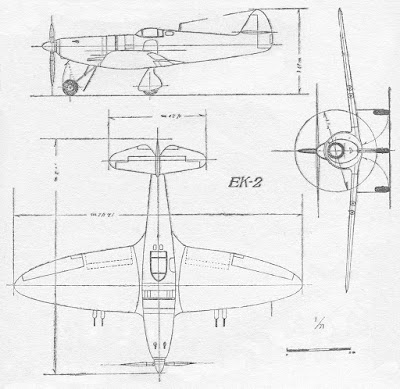 At first glance it looks like a very interesting combination of the Supermarine Spitfire and the Bell P-39 Airacobra. Quite intriguing as a proposal but things get bizarre with the radial engine choice. Radial engines placed that back in the fuselage and with a completely enclosed nose create huge problems with cooling.
Similar designs would be:
1. the Republic XP-72, with common features like the supercharger, the extension shaft for the prop and very similar armament

and is almost identical in concept with the
3. Piaggio P.119

An unusual design that does not look Japanese at all and would have been much more straightforward with a liquid-cooled engine. Let's not forget the various problems "Raiden" had with the placing of the engine further back in the fuselage and the need for a fan for cooling.
Posted by Arawasi

The way the nose cowling is shaped you would definitely expect massive problems with engine overheating. But let's not forget that there were no high-powered workable in-line engines in Japan at this time.
It's interesting to note the P-47M and N versions surpassed 700 kph even with their relatively blunt noses thanks to turbo-supercharging and laminar flow wing profiles - developments which were also in only a fledgling stage in Japan.
Great series, George - please carry on.

It is a common misconception that radial engine planes have poor drag coefficients, but that is not the case. A properly designed cowling can give a radial engine fighter as good aerodynamic qualities as any inline fighter, and the lack of air scoops for a radiator reduces drag even further. The P-47 and Corsair had drag numbers as good or better than other inline fighters of day. Japanese fighters also had minimal drag.

I agree. The effort in this design is to reduce drag in the nose but this comes with a price. Large air intakes are needed to cool the engine as shown in all the similar US, British and italian designs which actually create even more drag and meriad other problems.
So, as Winds points out, a cleverly designed "traditional" cowling would offer less drag and complications
The liquid-cooled engines is another solution but not without their own cooling challenges. The Ki-64 with her water evaporation cooling system on the wings is a fine example.
Thanks guys. More coming up.

Yes, the engine placement is a bit odd on this one, especially for a radial. The location is very close to the cockpit thus leading to a very hot pilot, a problem for the prototype Fw-190.

For radials let's no forget the additional thrust from the heat emissions through a well constructed cooling flap blending, e.g. on the F4U, the Fw 190 and several Japanese fighters. Liquid radiators created thrust augmentation, too, but not at the same high air travelling speeds.
The relatively low drag coefficients of the F4U and P-47 resulted not only from good cowlings but mainly from smart wing construction.