In the latest issue of our magazine, here, we introduced the various extraordinary aircraft designs submitted by amateur illustrators to vintage Japanese aviation magazines. While the series will continue on the magazine, we would like to show on this blog some of the more "funky" designs. We start with one from one of the most respected and prolific Japanese illustrators, the late Watanabe Rikyu, first published in the August 1943 issue of the magazine "Koku Shonen" (Aviation Youth).
Kawasemi Model 10 Air Defence Fighter
High altitude anti-bomber interceptor 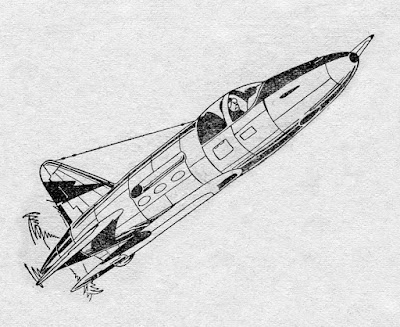 
Although at first glance the design may look as too "manga" and childish, you will notice a striking resemblance to the:
1. Dornier P.247/6 high performance fighter, here

Illustration by Peter Allen, from HERE.

All 1944-1945 designs that never left the drawing board.
Posted by Arawasi

This design would be an easy conversion to jet power, which would be the next logical step.