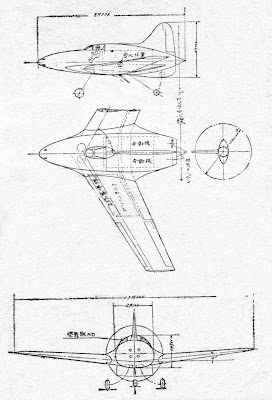 DATA
Engine: two 1700hp liquid-cooled inverted V 12cylinder
Span: 13.2m
Length: 8m
Height: 4m
Main wing area: 23.8sqm
Wing load: 189kg/sqm
Max. speed: 720km/h
Range @ cruising speed: 1,500km
Fuel: 2200l
Crew: 1
Armament: 2 X 30mm, 2 X 12.7mm
"Seiku" (Sky Dominator) is a fast fighter with high climbing speed.
The engines are installed in the same fashion like on the Heinkel 177 and drive a 4-blade propeller via an extension shaft.
Each engine has a turbine exhaust coming out from both sides of the fuselage.
Air intakes are behind both sides of the cockpit with a radiator installed in the middle.
Designed by: Ikeda from Yokohama & Maruyama from Yokosuka
Featured in the November 1944 issue of the magazine "Koku Shonen" (Aviation Youth)
The "aviation expert" of the magazine commented that it is a fantastic design that only needs a little attention in the landing gear and the nose.
Okay, this is one of the most interesting designs in the whole series because it is EXACTLY like the Lippisch P10-108, a 1942 German bomber project that never left the drawing board. From the overall shape and tail-less concept down to the two engines joined side-by-side, the 4-blade props and the extension shaft, the two designs are identical in every respect! Ofcourse it looks a lot like the Me 163 Komet but to me it is really amazing that two amateur Japanese designers thought in exactly the same way and took the aircraft in the same direction the Lippisch designers did.

It is easy to imagine a simpler version with only one engine in the rear (Henschel P.130) or the project evolving with one (Henschel P.135) or two (Lippisch P11-02) jet engines been installed. Even the experimental Ryan X13 Vertijet is very close.

Michael Thurow also noticed that it looks like the Northrop XP-56 Black Bullet.

There is also some resemblance to the Northrop XP-56 Bullit.

Regarding coupled inline engines I'd like to quote from 'Japanese Aero Engines 1910-1945' by Goodwin/Starkings p.54:
"The [Aichi] AC23 ... was beased on coupling two existing Atsuta engines ... in a side-coupled arrangement similar to the Daimler-Benz DB606 ... Two 1,700 hp AE1P-Kai Atsutas were used to form the 3,400 hp unit ... At least one unit was built, flight cleared, and installed in the first R2Y1 prototype, development of which had been instigated in early 1943. Flight testing of the completed aircraft was undertaken in May 1945, but by all accounts, the engine unit installation was unreliable and the short flight programme was disrupted by engine and oil overheating problems..."