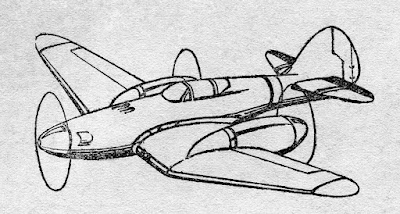 Crew: 1
Engine: Water-cooled 2000hp X 1, 1000hp X 2
Max. speed: 820 km/h
Service ceiling: 10000m
Range @ cruising speed: 2000km
Armament: 3 X 40mm cannons, 4 X 30mm cannons, 4 X 25kg bombs
Designed by junior high-school student Hata Kokichiro from Shimane Prefecture
Featured in the March 1944 issue of the magazine "Hiko Shonen" (Airplane Youth)
The "aviation expert" of the magazine commented that it is an overall good design but it is not clear how the 2000hp engine is cooled down. The three 40mm cannons firing through the propeller configuration is also improbable. The position of the ailerons is a bit strange as they are connected to the nacelles. But in general it is a good design that needs a little more attention to details.
A very unusual design that causes more problems than solves. To start with the fuel consumption by the three engines will necessitate large tanks; placed where? I agree that the cannons in the nose will not pair well with the prop. Also a nose wheel will be necessary to clear the ground from the two props on the wings. This means there will be very little space in the nose for armament. A very high speed reconnaissance unarmed version would be more possible. Something  like a three engine "Dinah"? But I'm left in amazement considering that such a cool and complex design was conceived by a junior high school student! And I'm wondering what ideas the professional designers in Mitsubishi or Nakajima toyed with.
Posted by Arawasi

I wonder how many official drawings and documents got trashed at the end of the war? Makes one wonder....

Yes, a very radical design that would be possible, but not very probable. I'm thinking that it would be quite heavy as well.
Very interesting, though!