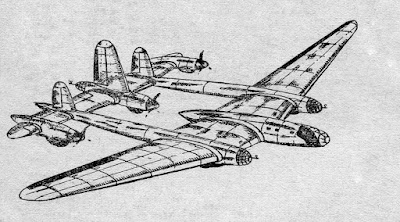 Engine: liquid-cool 2500hp X 3
Length: 35m
Span: 58m
Max. speed: 650 km/h
Cruising speed: 580 km/h
Range @ cruising speed: 1500km
Ceiling: 12000m
Bomb load: 6000kg (middle of fuselage, inside the wings)
Crew: 9-10
Designed by Fukushima Masatoshi from Osaka
Featured in the May 1944 issue of the magazine "Koku Shonen" (Aviation Youth)
The last design for this year is a very exciting and unusual one that resembles, in concept, the Arado E470. A more orthodox and realistic design would have the engines on the main wing instead of the tail.
Posted by Arawasi

"A more orthodox and realistic design would have the engines on the main wing instead of the tail." Yes indeed!
Imagine the center of gravity issues with all three engines 'way back there.

Nice design for a Miyazaki's film.