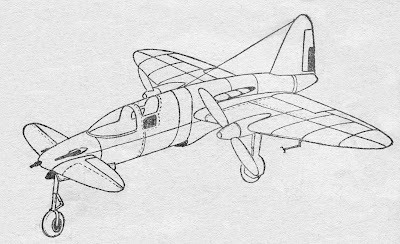 1. A heavy fighter with focus on speed and armament. Heavy wing load, engine installed in the rear so center of gravity towards the rear. The placement of the cockpit in the front offers a very good front view. Machine cannons all in the front.

2. Engine of high horse power, so the propellers are counter-rotating. The propeller diameter is small, so the aircraft sits low to ensure safety during landing.
3. The horizontal tail is placed in the front so the propeller air flow to the rear is unobstructed.
DATA
Engine: liquid cool V 14 cylinder 2500hp (18 cylinder air-cooled radial 2,130hp)
Span: 11.5 (11.114)
Length: 9.5m (9.66m)
Height: 3m (3.92m)
Main wing area: 15.5 sqm (20.559 sqm)
Weight: 3700kg (empty 3645kg)
Wing load: 239 kg/sqm (240.4 kg/sqm)
Power loading: 1.48 kg/sqm (2.3 kg/sqm)
Max. speed: 640 km/h (750km/h)
Landing speed: 110 km/h
Range @ cruising speed: 3000km (851km)
Armament: 20mm X 2, 30mm X 1 (30mm X 4)
Design by Waguri Yutaro from Fukuoka
Featured in the March 1944 issue of the magazine "Koku Shonen" (Aviation Youth)
The "aviation expert" of the magazine commented that it is an excellent design and there is nothing really negative to say. One suggestion would be to move the radiator from under the fuselage in the middle towards the rear for better wing flow and thrust. A rocket engine could also be placed.
He ads that it is impossible to consider a 14-cylinder engine as the vibration would be excessive. The 3000km range is also highly improbable.
It is obvious the design bares a striking resemblance to the Kyushu J7W "Shinden" (data in parentheses for comparison), design of which started in 1943 and the first flight of the first prototype was in August 1945.
The peculiar engine/prop system with the extension shafts, was very popular among these amateur aircraft designers but very impractical in reality. Beyond this feature though it is easy to imagine the projects with more conventional means of propulsion.
Some other aircraft using the same configuration were:
Salmson-Moineau S.M.1

Wing propellers on geared extension shafts were also the concept of the Vought XF5U, although the lay-out was completely different and the Vought actually flew.